Medic in the Green Time
by Marc Levy 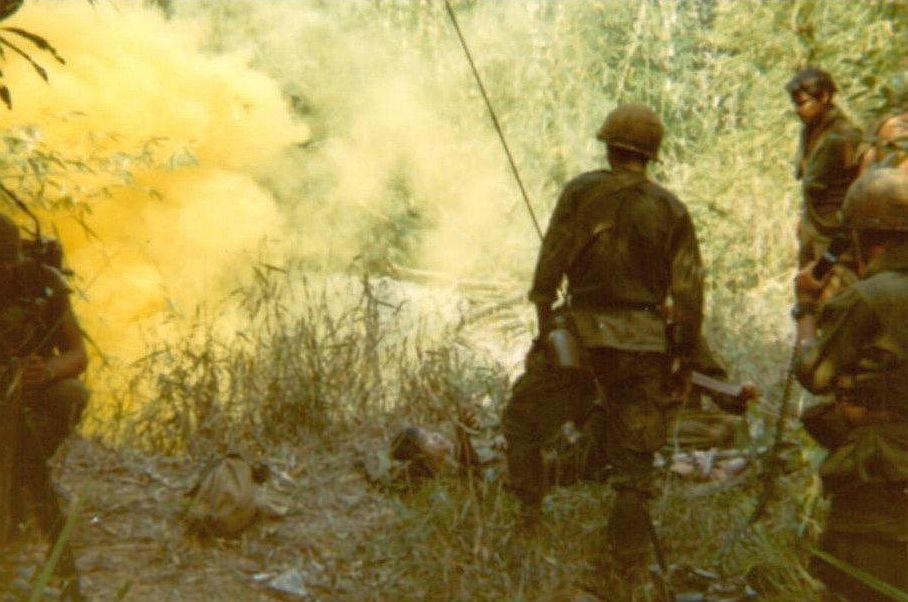 After the shooting stops, after the wounded girl is hoisted away, after we walk past the bodies and the man with no head, after the RTO curses after stepping in brains, the lieutenant says,"You gonna put me in for the Purple Heart, Doc?"

Here is how it happened:

In one great flash BAANG the mines explode. The enemy shriek like animals, the howls so bad we cover our ears.

The survivors run past firing volleys to draw us out. When they are gone the wounded wail for hours until they are dead.

In the morning we recon the automatic ambush. A half-dozen bodies lie bunched in a heap. A few meters on, a man locked in rigor mortis sits on a tree stump, his death face intact. All are riddled or ripped apart by the Claymore's whizzing steel pellets.

The lieutenant walks forward. "Chieu hoi!" he shouts. But the old man will not surrender and lifts his AK and the lieutenant wastes him. BRRRAAPP. Then everyone opens up. When the shooting stops, when the smoke clears, the old man is headless but the girl next to him appears to wake from a dream.

"Doc, get up here!" shouts the lieutenant.

She raises one arm, reaches for my canteen, claws at it. Everyone wonders: will he do it? Waste a quart of water on a fucking gook? Never see that canteen again. Contaminated. Poisoned. Untouchable. The girl opens her parched lips; instead of words she makes a strange guttural noise. What to do? What? Just give her the goddamn water. Just give it.

Both her legs are broken. From the mines or machine gun, it's hard to tell. There's nothing for splints except rotted bamboo. More groans. More water. More. Everyone looks as she glugs it down, falls back to sleep.

When the bird arrives they kick out a litter. We strap her in, they hoist her up. Then they are gone.

There is time to scavenge for souvenirs. Watches, belt buckles, money, these are the things we crave from the dead. Intimate diaries, pocket photos of wives or lovers or sons and daughters have no value. The enemy is an unfeeling insect to be stomped out. They are not human beings.

"Saddle up," says the lieutenant.

Ten minutes later he stops, opens his mouth wide, pulls back his upper lip. The left canine incisor is cracked. A make shift paste will do.

"Doc, you gonna put me in for a Purple Heart?"

Later we learn the girl lived. That five hundred soldiers had stampeded past.

Decades later I have tears for my lieutenant, for the injured girl, the headless man, for all this war's dead and wounded. For the human folly of it all. Folly and sorrow.

Marc Levy was an infantry medic with the First Cavalry in Vietnam and Cambodia. His website is Medic in the Green Time. His war related prose and poetry have been widely published.